As recently as 10 years ago, political ad budgets were determined “by the biggest ego in the room,” Sharon Aho, OTT media director, at BrabenderCox (above), told those gathered Wednesday at MediaPost’s TV & Video Insider Summit in Scottsdale, Arizona. “We had to make ads turn around in 8 to 10 hours, trying to keep up with opponents. Advertising was based on geography and demographics.” Today, not so much.

“Data has become king,” Aho said -- telling us how and where to advertise. ”Data makes things more simple and more complicated.” 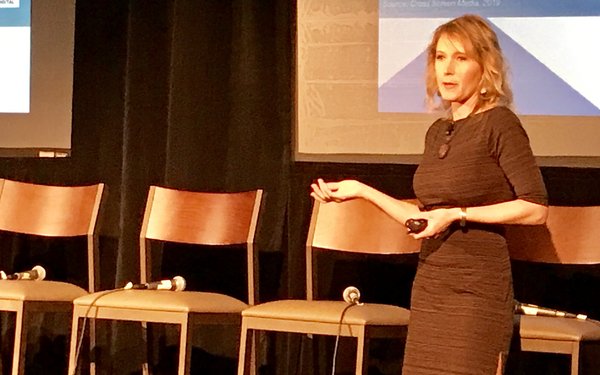 Those involved in political marketing love OTT, she said, because it reaches the cordless and offers increased frequency to a high-value target audience. Her agency’s work for Kevin Stitt, who was elected governor of Oklahoma in 2018 included a video called “Homework,” targeted at independent woman. In it, the Stitt family children are heard telling voters why they should “give Dad the job of fixing Oklahoma.”

Another reason for the OTT love is that it “answers the efficiency program, especially in expensive markets.” For congressional races, this is a big thing. And a fourth reason, said Aho, is that it breaks down the walls between traditional and digital. “It’s moving our industry forward.”

In the case of Susan Brooks, an Indiana resident looking to be re-elected to the U.S. House of Representatives in 2018, Aho’s agency produced an ad in which a Brooks supporters talks about early detection for breast cancer and why mammography tests aren’t covered by insurance. The product targeted female voters and it worked.

In conclusion, she said, “data can inform our decisions, direct our decisions -- but one thing we know is that creativity trumps everything.”

READ THE STORY ON MEDIAPOST.COM